Basically a man in a wig doing silly songs.

Stewart Lodge (as one of resident comperes) appears regularly

at Cabaret Boom Boom in Walkley Sheffield: The best Cabaret in the World (is that right? Ed) 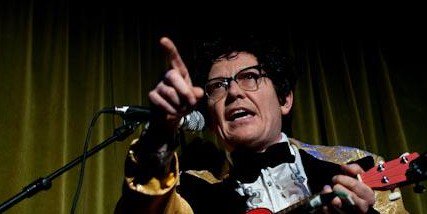 Billy Button Retweeted · Alison Moyet @AlisonMoyet
Saturday, March 28th, 2020 at 7:54pm
Social Distancing is very good. Distancing yourself from the shit your dog leaves on the pavement is not so good.
Socially Connect with your dog’s shit.
That’s still permissible.
Embrace your freedoms.
View on Twitter
119
0

Billy Button Retweeted · Squinty McGinty @CabaretSaltaire
Tuesday, March 24th, 2020 at 7:07am
If you're in need of some light relief, and understand the importance of biscuits give this a listen. https://t.co/dK0whpTCFG
View on Twitter
2
0

Billy Button Retweeted · Squinty McGinty @CabaretSaltaire
Tuesday, March 24th, 2020 at 7:00am
If me and @TheBillyButton had a balcony we'd be out singing to you today. As we're both in a static caravan that's not going to happen. As a consolation Billy's asked me to send you this as an important message for these times. https://t.co/4RsjeHAszh
View on Twitter
4
0

Billy Button Retweeted · The Bar-Steward Sons of Val Doonican @barstewardsons
Monday, March 23rd, 2020 at 9:09am
For anyone who missed it last night, Scott Doonican's BIG NEET IN is available on catch up for the next 48 hours before it is removed. For anyone who tuned in or pledged CHEERS
https://t.co/6lJjeHr0YF
View on Twitter
10
0

Billy Button Retweeted · Mark Thomas @markthomasinfo
Friday, March 20th, 2020 at 6:46am
Donate to Trussell Trust and get download of my NHS show for free, give what you can. Thanks x https://t.co/IGnTPmHNGq
View on Twitter
68
0

Billy ButtonThursday, June 27th, 2019 at 8:53am
A corking first full day of the Walkley Festival! You haven't lived until you've seen Tim from Walkley's own Cabaret Boom Boom being dragged across Walkley Community Centre@ 7a Fir Street car park by a couple of men dressed as ducks 😂 Not sure if we can top that over the next two weeks but we'll certainly try! What was your highlight?

Billy ButtonFriday, August 25th, 2017 at 10:22am
Billy Button's big-bouncy-balls-in-his-big-briefs...game. i am available for kids parties.

Billy ButtonFriday, July 21st, 2017 at 9:10am
And I will be teaching people how to play the Kazoo.
https://www.clownfestmcr.com/